Well, true to form the recruitment industry kicks off the new year in style with three big changes that have a big impact on recruiters who are using social networks as part of their recruitment strategy. They are all significant and are likely to change the way some recruiters work - or at least it will make them think  about it!

So what are these three new changes to LinkedIn and Facebook that will effect recruiters?

1. LinkedIn Search. This is huge and will impact every recruiter, sourcer and researcher that used the free or premium versions of LinkedIn (not those with the recruiter license). This is probably the most controversial changes to LinkedIn search we have ever seen and it came into effect last week. In simple terms, LinkedIn are seemingly tightening up their platform access for recruiters, sourcers and researchers. People that use LinkedIn to perform many searches a day/week for their job (and that is mainly the recruitment industry, after all) are now being ‘encouraged’ to upgrade to more expensive premium packages, by having restrictions placed on their current searching activity. Just to give you an idea of the restriction, the monthly limit for searches is estimated at anywhere between 60-100 a month! Most good recruiters would burn that through in a day or two. Quite rightfully, LinkedIn want to further monetise their huge database, and I have no issue with that, but as always with LinkedIn, it is the way they have done it with no communication to users it was going to happen, was the biggest gripe. They didn’t tell anyone, and continue not to do so - unless you read their blog (which many people don’t!). I use one of the ‘old’ premium packages that cost me £14.99 a month  - that has now doubled to £29.99 a month to give me the same access I previously had with search. As I said I have no issue with paying, I always have, but if you have a team of recruiters, this could get expensive.
There have been two brilliant posts written this week about this LinkedIn limiting search. The first by Chris South examines what the actual commercial search limit is now on LinkedIn, and the second is by Vince Szymczak, which explains how recruiters can get around the LinkedIn issue by making use of x-raying Google for your LinkedIn searches.

2. Facebook Graph Search. The other big change (so far) was from Facebook. Just as we start getting used to the awesome Facebook Graph Search for recruitment, they go ahead and change it! They have made significant changes to the way it can be used, by changing the natural language searches that can be used to find people. While I am sure it is going to be part of the bigger changes on Facebook (see No.3) it has removed some of the very useful filtering the search allowed for. That said Facebook Graph Search is still a brilliant tool for recruiters and should be part of your social media recruiting toolbox. Fortunately Balazs Paroczay and Shane McCusker have worked their magic and created an awesome new tool to make it really easy to use the ‘revised’ graph search on Facebook. It makes it really easy to now use Facebook to find people.

3. Facebook At Work. This isn’t with you yet, but it will be very soon, and will be huge in my opinion.They are going directly after LinkedIn and with a platform that has approximately four times the scale of LinkedIn, Facebook can make a big dent in LinkedIn’s earnings if they get it right. Facebook At Work will be accessible via its main Facebook website, which will let businesses create their own social networks amongst their employees that are built to look and act like Facebook itself. Employers will be able to create separate log-ins for employees to use with their Work accounts, or users can link these up with their other profiles to access everything in one place. Of course it will be mobile as well with a supported app, and Facebook have made it clear, that they will treat the two accounts as separate, which will hopefully make more companies (who are still banning it) start to allow their employees to use it at work. You can read more about this exciting development in this Facebook At Work article.

These will definitely not be the last changes this year on either of these social networks. Only my opinion but I think we are also going to see some significant changes to LinkedIn Groups in the near future, as LinkedIn continue their tightening of their dominant network.

A big thank you to Louise Triance and her team at  UK Recruiter this week, as this blog won the Recruitment Blog of the Year. I am obviously very pleased as that makes it two years running now. More importantly to me it means that the content I write resonates with you, the audience. Thank you to all that voted.

And if you didn’t already know about my new book -> Social Media Recruitment - How to successfully integrate social media into recruitment strategy,   is being published in the next few months. Readers of this blog can get a pre-order discount of 25% of RRP. Click here to see more details about the book. 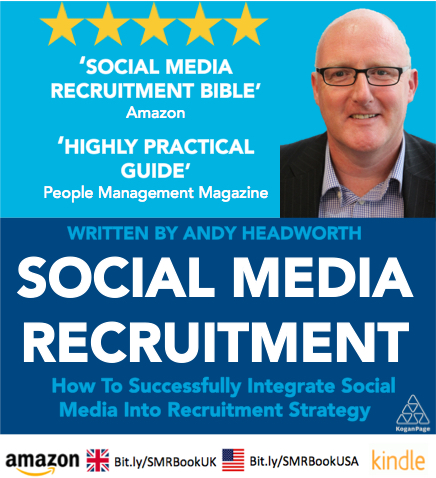